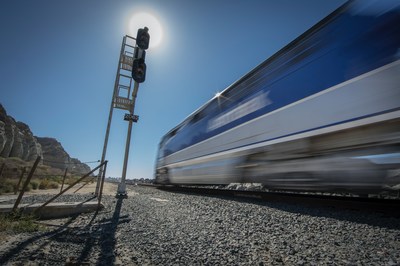 September is Rail Safety Month in California and September 23 – 29, 2018 is U.S. Rail Safety Week across the nation. California leads the nation in annual rail fatalities for the most highway-rail grade and trespassing casualties, according to CAOL and the Federal Railroad Administration. Amtrak Pacific Surfliner and CAOL seek to reduce collisions, injuries and fatalities at rail grade crossings and on railroad rights-of-way through education, engineering, and enforcement.

"It's critical that we work together to educate the public on ways to keep themselves and their loved ones safe around train tracks," said Bryan MacDonald, chairman of the Los Angeles – San Diego – San Luis Obispo Rail Corridor Agency, which oversees the Pacific Surfliner service. "Walking, jogging, and taking pictures on or near railroad tracks are all illegal activities that are extremely dangerous and should always be avoided."

Andrew Heaney, a starting pitcher for the Angels, recently recorded a rail safety radio spot encouraging fans to follow simple safety rules. "In baseball, you always have to run to first base and stay within the lines," Heaney says in the radio spot. "It's the same with trains. Remember to cross train tracks only at designated pedestrian or roadway crossings, and obey all posted warning signs and signals."

Most accidents and incidents on railroad tracks are preventable by following safety rules. Pedestrians are also urged to never walk on train tracks, and remember that trains always have the right of way and cannot stop quickly to avoid obstacles.

For more information or to request a free rail safety presentation, visit http://www.pacificsurfliner.com/safety/, http://www.caol.us/ or https://oli.org/

# # #
About the Pacific Surfliner
The Pacific Surfliner travels along a 351-mile coastal rail route through San Diego, Orange, Los Angeles, Ventura, Santa Barbara and San Luis Obispo counties, serving 29 stations. It is the busiest state-supported intercity passenger rail route in the United States with 24 daily trains and annual ridership of nearly 3 million. To learn more and plan a trip, visit PacificSurfliner.com, like Pacific Surfliner on Facebook, or @PacSurfliners on Twitter.

About Angels Baseball
The Los Angeles Angels joined Major League Baseball as an expansion team in 1961 and have since gone on to win nine American League Western Division Championships, host three All-Star games and capture the 2002 World Series Championship. Over its 58-year history, the franchise also boasts four MVP’s, two Cy Young winners, two Rookie of the Year winners, 37 Rawlings Gold Glove winners and 155 All-Stars. Visit the Angels online at www.Angels.com, follow on Twitter @Angels and like on Facebook at www.facebook.com/Angels. For media information, visit www.angelspressbox.com.

About the San Diego Padres
The San Diego Padres are a Major League Baseball team committed to (1) fielding a team worthy of the fans support with the goal of competing for a World Series Championship each season, (2) providing a fun, affordable and entertaining experience at Petco Park and marketing that experience to a diverse fan base throughout the entire San Diego and Baja California region, and (3) being active and vital members of the community.